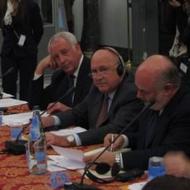 Recently the Nobel Peace Laureates gathered in Rome for the 7th World Summit, where they adopted “The Rome Declaration,” a very strong and clear statement on nuclear weapons.  Everyone working for disarmament is encouraged to use this text in their own advocacy and spread it far and wide.

It is our great pleasure to call your attention to the recent resolution in the Parliament of Australia in which the Rome Declaration is referenced. The resolution was introduced by Senator Lyn Allison, a council member of the Parliamentary Network for Nuclear Disarmament (PNND), a program of the Global Security Institute (GSI).

This resolution furthers the commitment to advance a more secure world. We urge everyone to distribute the Rome Declaration for such advocacy purposes at all levels of society as quickly and aggressively as possible. We are in a race against time to save the Nuclear Nonproliferation Treaty, which requires minimal steps such as a Comprehensive Nuclear Test Ban Treaty to give credence to the pledges of the nuclear weapons states to work to eliminate nuclear weapons universally.

We encourage you to visit the GSI website, which features copies of the Rome Declaration, along with transcripts of presentations delivered there, including those by GSI Advisor Ambassador Jayantha Dhanapala, former Under Secretary-General for Disarmament Affairs and Hon. Doug Roche, O.C., Chairman of the Middle Powers Initiative.

You may also enjoy the compilation of speeches from previous Nobel Summits found here.

May peace prevail in our hearts and in the world this season and throughout the coming year.