A Time For Serious Thinking This is a time in which serious thinking is needed.
Spectacle is interesting entertainment, but only for a short while. It is insufficient for responsible governance of international security issues. The recent G7 Summit, which brought allies to acrimony, is an example of failure. The meeting of President Trump and Chairman Kim might prove to have opened a door to success, but only if mature professional diplomacy is exercised going forward. I tried to express this in an opinion article for Sputnik News.
In a Reuters article, John Mecklin of the Bulletin of Atomic Scientists has succinctly explained how the process of denuclearization is complex, long, and requires diligent technical and diplomatic attention.
Several years ago, Nobel Peace Laureate and former President of Korea Kim Dae Jung hosted a Nobel Peace Summit in Gwangju, Korea. It was part of a series of such gatherings of Nobel Laureates. As a representative of the Nobel Peace Laureate organization, the International Peace Bureau, I proposed turning the no man’s land of the Demilitarized Zone into an International Peace Park in “Ending War, Pursuing Peace.” At the time, it was a small confidence building measure of a largely symbolic nature, and it resonated with several experts.
The Nobel Peace Laureates, who gathered there stated in the Gwangju Declaration:
Now, such an endeavor could be a dynamic confidence building step on the road to fulfilling the grander aspirations contained in the declaration signed by President Trump and Chairman Kim.
For a further background, please see our overview about the DMZ.
Another confidence building step that would also help the entire world would be the agreement of both North Korea and the US to ratify the Comprehensive Test Ban Treaty,a significant step to bring the Treaty into force. For the US to lead in nonproliferation efforts, it must exemplify the principles to be applied universally (See: Practical Proposals for Real Change in North Korea).
Much more sophisticated and deeply well thought out proposals for international peace and security can be found in books authored by GSI colleagues Ambassador James Goodby (with Secretary George Shultz), Ambassador Thomas Graham, Senator Douglas Roche, and Hon. Tarja Cronberg.
Each of these experts have significantly contributed to many successful diplomatic initiatives that have proved that cooperation, compromise, and finding common ground is achievable and far preferable to belligerence, fear, distrust and increased arms racing.
I urge your attention to their serious work on numerous issues relating to nuclear weapons, which demonstrate an appropriate level of discourse necessary to move from spectacle to the pursuit of real security.
Sincerely,
Jonathan Granoff, President

The War That Must Never Be Fought: Dilemmas of Nuclear Deterrence: Joint Enterprise Proposal

H.E. Ambassador James Goodby, a founding member of GSI’s Bipartisan Security Group, along with former Secretary of State George Shultz edited and contributed to a series of articles comprising The War That Must Never Be Fought: Dilemmas of Nuclear Deterrence.  Of particular interest is the material relating to creating a joint enterprise with Russia to move toward a world free of nuclear arms in the chapter, “Creating the Conditions for a World without Nuclear Weapons.”
The Alternate Route 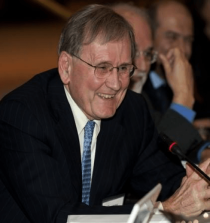 In connection with the tensions between the US and Russia, Ambassador Thomas Graham Jr., the Chairman of GSI’s Bipartisan Security Group and member of its Board of Directors, wrote a new book, entitled The Alternate Route.
Graham explores avenues where even today progress can be made between the U.S. and Russia and describes several close calls that nearly brought about the catastrophic use of nuclear weapons. Moreover, he examines the value of the nuclear weapon free zone established by each of the five treaties – Latin America, the South Pacific, Africa, South-East Asia, and Central Asia. He explains in detail why they were negotiated, how they were negotiated, their degree of success, and why they should be expanded.

Similarly, at the United Nations Third Conference of States Parties and Signatories of Treaties that Establish Nuclear-Weapon-Free Zones and Mongolia, Jonathan Granoff delivered a presentation, entitled “Nuclear Weapons Free Zones: The Power of Success to Be Ignored No Longer.” He stressed the importance of the NWFZs and recommended that “it is time that the entire world became a nuclear weapons free zone”(Video).

Hope Not Fear: Building Peace in a Fractured World

The Honorable Douglas Roche, O.C., an Advisory Board Member of GSI, wrote a new book entitled  Hope Not Fear: Building Peace in a Fractured World.
Roche presents a sober analysis of the current existential threats facing humanity directing us to practical solutions. He provides, not only intellectually insightful critiques of current dangerous policies, but also uplifting routes to sustainable security. Every political leader and concerned citizen should read this book.

In light of the Trump Administration’s decision to withdraw from the Joint Comprehensive Plan of Action (JCPOA) embodied in a Security Council Resolution designed to constrain Iran’s nuclear program, we wish to underscore Dr. Tarja Cronberg, Chair of the Middle Powers Initiative’s book, entitledNuclear Multilateralism and Iran: Inside EU Negotiations. She chronicles the important commitments of European nations in creating the JCPOA. It is a must read to understand the consequences with US actions with respect to its leaders. Dr. Cronberg served as Head of the European Parliament’s Delegation for Relations with Iran and is uniquely qualified to offer astute insights.
Also in an article, entitled “Insecurity Shadows the Iran Deal,” Cronberg describes the value of the JCPOA in advancing multilateralism.
GSI President Jonathan Granoff has written regarding the legal consequences of the decision of the US to withdraw its compliance with the Security Council resolution in The Hill entitled “US doesn’t have the right to violate Iran nuclear deal.”