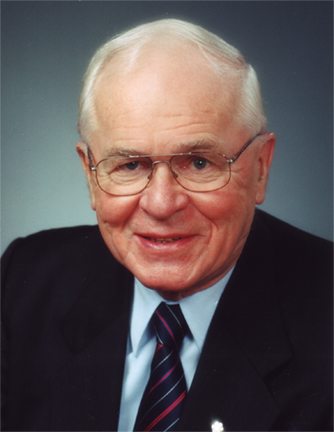 Douglas Roche, OC, KCSG is a Canadian author, parliamentarian, diplomat and peace activist who has specialized throughout his 40-year public career in peace and human security issues. Roche served as Progressive Conservative Member of Parliament (MP) and in 1984 was appointed Canada’s Ambassador for Disarmament. He was appointed to the Senate of Canada on September 17, 1998, where he served until June 13, 2004. He was appointed Chairman of the United Nations Disarmament Committee at the 43rd General Assembly.

In 1995, Pope John Paul II presented him with the Papal Medal for his service as Special Adviser on disarmament and security matters, and in 1998 the Holy See named him a Knight Commander of the Order of St. Gregory the Great.

In 2018, he was recognized by the International Peace Bureau as one of three recipients of the Seán MacBride Peace Prize. He is an Officer of the Order of Canada.

Mr. Roche has authored more than 20 books including The United Nations in the 21st Century, The Human Right to Peace, and Hope Not Fear.