GSI has convened a core of experts with exceptional experience in diplomacy, law, intelligence, military affairs, and international security, to form the Nonpartisan Security Group (NSG).

Its mission is to educate, inspire, and advocate for policies that reduce conflict, strengthen the rule of law, prevent the proliferation of weapons of mass destruction, and advance toward a nuclear weapons free world.

There is a now a critical need to educate U.S. Representatives, Senators, their staffs, State Department and other officials, as well as public opinion makers, the public, and the press on issues relating to global security and the value and substantive accomplishments in the area of diplomacy, arms control, nonproliferation and disarmament. Without these tools excessive reliance on military power becomes increasing likely and in the arena of nuclear weapons exceptionally hazardous.

For this reason the Global Security Institute has gathered a group of outstanding former diplomats and experts with deep experience in international security issues and successful advocacy. In fact, their collective successes in making our world a safer place is nothing short of inspiring. While the members of the Nonpartisan Security Group do not always fully agree with each other on every aspect of public policy, they are united by an urgent need to assist key constituencies in understanding and responding to the extreme security challenges facing the United States and the world today.

NSG is informed by the successes of the Bipartisan Security Group, which included successful education and advocacy in the U.S. Congress and the executive branch and was able to advance fulfillment of nuclear nonproliferation and disarmament treaty commitments. It helped stimulate hearings in Congress and numerous educational events. (Testimonies to Congress by BSG members | Report: GSI Experts Testify Before Congress | Bipartisan Task Force on Limits of Unilateralism).

With an Administration seemingly unconcerned with the consequences of downgrading treaties, this educational service is critical to global security. If the U.S. fails to pursue the power of law it will help to create a world where only power counts. This would be catastrophically dangerous and an insult to the lives and treasure expended by the U.S. to create the modern world where commerce, travel, communications, and generally peace is pursued in a rule based, norm based, peaceful fashion. The alternative will be violence and war.

The NSG’s interests include a focus on several critically important matters of international security. Some are of immediate concern and action and some are more long term: 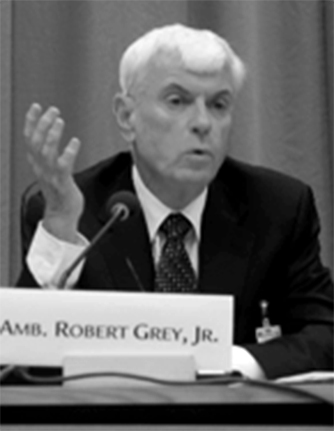 Former Political Advisor to the Supreme Allied Commander at NATO, former Counselor for Political Affairs of the US Mission to the UN, and more. END_OF_DOCUMENT_TOKEN_TO_BE_REPLACED Senior U.S. diplomat involved in the negotiation of every major international arms control and non-proliferation agreement for the past 30 years. END_OF_DOCUMENT_TOKEN_TO_BE_REPLACED In February, Director of National Intelligence Daniel Coats deemed cyberwarfare the No. 1 threat to the United States. Yet this month, new national security adviser John Bolton decided to eliminate the cybersecurity coordinator position on the National Security...

August 10, 2007 Dear Friend of GSI, The Nonpartisan Security Group (NSG), the Washington-based program of the Global Security Institute (GSI), has been very active in D.C.  Just this month, we met with Ambassador Thomas Pickering and the Center Aisle Caucus, where we... Remarks by Ambassador Henrik Salander, Secretary-General, Weapons of Mass Destruction Commission (WMDC) The Capitol Building, Washington, DC April 27, 2004 I want to thank the Bipartisan Task Force on Non-Proliferation for including me in this panel. I look forward to...

Washington, D.C. April 27, 2004 Today, I want to comment especially on a number of the proposals President Bush made at the National Defense University on February 11 on proliferation. But before I do that, I should say that the present state of the nuclear...